To be punk and woman or not to be, that is the question 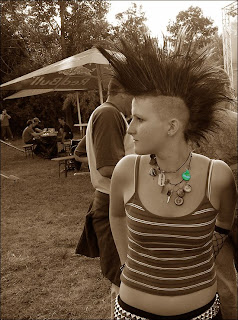 Gender perspectives, beyond the banality and insecurity of feminisms, are necessary for men and women to study and express what precisely characterizes them as men and women. It is not a merely chromosome issue, although that physiological differences acquire special importance - and, certainly, more than what some gender scholars tend to admit. Thus, there's no need to continue with discourses on "the human being", so in abstract, when is necessary to specify if male or female, nor of treaties on the nature of women written by men.
But... wasn't this a blog about aesthetics? Yes it is. And wasn't I an anti-feminist? Yes, still I am. It's just that this of gender was relevant because I have received several references about the punk music studied from gender perspectives. What can it mean to be punk and woman at the same time? The following list may help to elucidate this.
BOOKS:
Raha, Maria, Cinderella's Big Score: Women of the Punk and Indie Underground (Live Girls), Seal Press, 2004, 288 p.
Turner, Cherie, Everything You Need to Know About the Riot Grrrl Movement: The Feminism of a New Generation, Rosen Publishing Group, 2001, 64 p.
Leonard, Marion, Gender in the Music Industry, Ashgate Pub Co., 2007, 239 p.
Bennett, Andy & Richard A. Peterson (eds.), Music Scenes: Local, Translocal, and Virtual, Vanderbilt University Press, 2004, 272 p.
Leblanc, Lauraine, Pretty in Punk: Girl's Gender Resistance in a Boy's Subculture, Rutgers University Press, 1999, 304 p.
Monem, Nadine (ed.), Riot Grrrl: Revolution Girl Style Now!, Black Dog Publishing, 2007, 189 p.
Reynolds, Simon & Joy Press, The Sex Revolts: Gender, Rebellion, and Rock'N Roll, Harvard University Press, 1996, 432 p.
Whiteley, Sheila (ed.), Sexing the Groove: Popular Music and Gender, Routledge, 1997, 400 p.
Haenfler, Ross, Straight Edge: Clean-Living Youth, Hardcore Punk, And Social Change, Rutgers University Press, 2006, 248 p.

Straight edge is a clean living youth movement that emerged from the punk rock subculture in the early 1980s. Its basic tenets promote a drug-free, tobacco-free, and sexually responsible lifestyle - tenets that, on the surface, seem counter to those typical of teenage rebellion. For many straight-edge kids, however, being clean and sober was (and still is) the ultimate expression of resistance - resistance to the consumerist and self-indulgent ethos that defines mainstream U.S. culture.

The article comments that the Ladyfest 2000, a punk and indie rock music festival in Olympia, Washington, became a source of endless jokes in the local rock music industry. Prominent queer women refused to participate in the festival. Some called it Ladyquest because of the association between the music scene and queer identities.

Focuses on the use of international girl magazines as outlets for artistic expression and social and political criticism. Misrepresentation of working class women and queer youth in mainstream mass media; Emergence of riot girl movement from the alternative and punk music scene in the U.S.; Information on girls' studies which constructs girlhood as a separate phase in female identity formation.